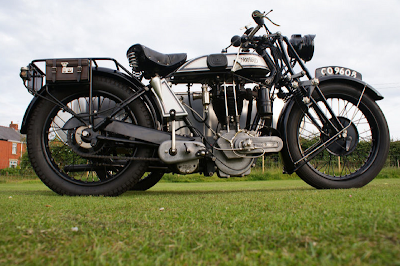 -JdK- Last October we published an article about a Norton advertised as the 1926 Maudes Trophy winner ridden by Phil Pike. Tracing it's history revealed that the machine is a replica and the only 'Pike part' of the machine may be part of the frame. Which is fine, as it certainly is a nice machine but we think any prospective buyer should be aware about this part of the machine's history too.

The bike remained unsold at Bonhams and is now advertised on eBay. A carefully worded description is used and as with the Bonhams catalogue the suggestion remains that this machine is the genuine article. I contacted the vendor to ask for his opinion which is provided below.

"I have read the article and there are many items which could be disputed; however I cannot be bothered to argue. As far as I am concerned the bike is sound and good, how many restored bikes are original? Given the age and condition they are found in I expect it to be 10% original at best!! Certainly restored bikes usually have new wheels, rims, tank, forks, mudguards, toolboxes etc, etc., if this was not the case there would not be a thriving parts industry and there would be no need for Autojumbles! I have been as honest as I know in selling the bike, the article published does not know all of the facts and makes assumptions, if you have concerns then do not bid. Best regards, Dale"
Newer Post Older Post Home