Sent by Martin in the UK. 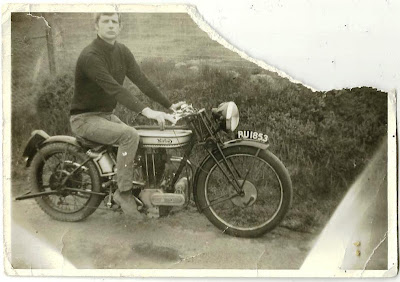 Enclosed old photo taken in 1963 of me on my 1925 Model 18 with registration RU1853. My Norton had a dry sump engine with some racing history and was sold in 1970. Still road taxed according to DVLA, has anyone seen her?

JdK: "Looking at the engine and what appears to be the distinctive wrap-around magneto bracket this could be a Model 25. It also has the correct Model 25 horizontally-split timing cover. Who knows more about this machine?"

Roger: "The registration dates to autumn 1925 so the dating is probably correct.  I think that the "magneto" is a magdyno because of the later addition of the electric lighting set.  Both the headlamp and rear lamp/number plate look out of place. The oil tank is too rounded for 1925 where the squarer type found on LPD1 was the normal shape for the dry sump engines used in the TT that year. Not sure about the engine, the barrel does look like the 1925 TT versions and is more the shape of the 588 version although the front engine mounting is for the 490."