Steve in New Zealand sent the following story and photos of his Norton. 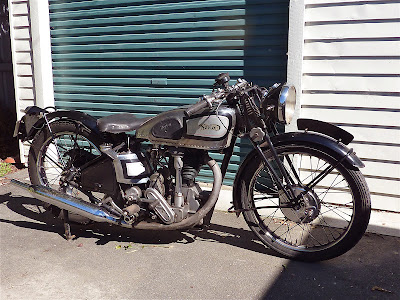 This Norton was registered as BVW 67 on the 1st of January 1935. I believe it may have been registered in Colchester, Essex. I know nothing of its early history but it was acquired by Charlie Hawtin after the war from what I can gather in pieces as it had been dismantled and hidden away to avoid it being requisitioned for war service. I don't know if there was actually conscription set up for motorcycles at the time, but I could see some members the Home Guard taking great delight in roaring around the countryside on such a machine. I think the bike was rebuilt and running by 1950, the only modification I know about is that a new ex-WD Mag-Dyno was fitted complete with voltage regulator in place of the 3 brush set up, but the original switch is still in the headlamp. I can remember my father mentioning to me that Charlie had great difficultly in getting fork links to give the necessary trail to suit use with a sidecar. 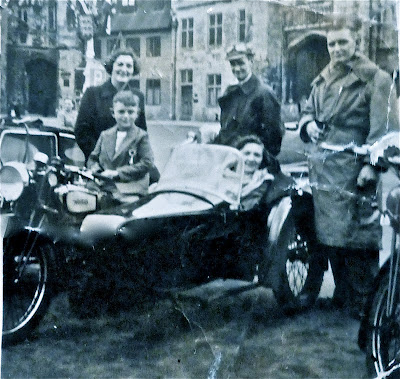 Above: outside Wells Cathedral June 1953 - Charlie Hawtin, the owner of the International is on the right with me in the driving seat. 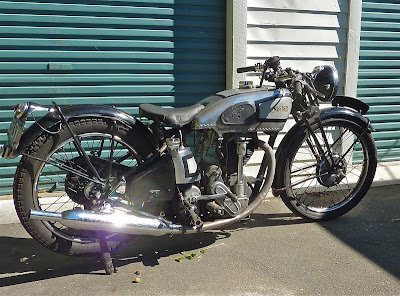 I can remember going on a trip about 1952 where my Father took Charlie to see Francis Beart who had his workshop just off the Guildford bypass, where he purchased a single Knocker Manx electron cambox which had been worked on by - and is stamped - F.L. Beart, because I suspect the original cambox was not very oil tight. I can remember that when they stripped it the cams were were blue, it was an obvious ''Did Not Finish". 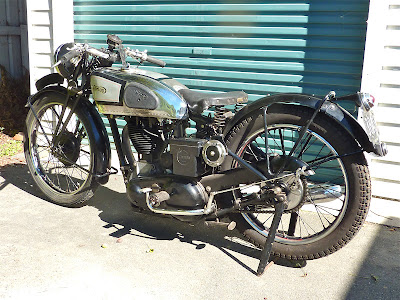 The Norton with sidecar attached was in regular use until 1959 when it was laid up due to his wife could no longer passenger in the open sidecar due to an ear problem. The sidecar was removed and later sold. The Inter was stored even after Charlie passed away in 1965. In 1969 the widow sold up and moved to be nearer her family in North Yorkshire and I became guardian of the machine. It was used for a couple of summer seasons for Vintage events, then I ended up going to sea, so the bike was once more in storage. 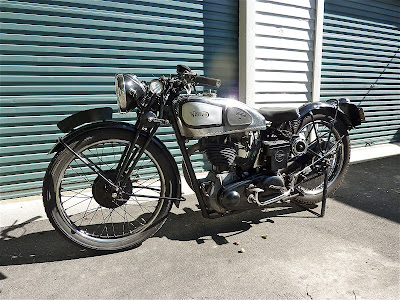 I later moved to New Zealand and brought the Norton with me, again it was used for a couple of seasons for Vintage events.  Unfortunately because it still had sidecar links fitted to the forks, the road holding could get a little interesting unless the Andre damper was well screwed down. One day I ended up having a mother of all tank slappers and relegated the bike to the back of the shed, and after several moves, and now I have retired I thought I would have a go at getting the machine up and running again, this time hopefully I can locate the necessary bits to so that I too can experience the legendary Norton roadholding. The photos are of the bike as it is today, it certainly has not changed in any significant way since it was put together after the war. I fitted a new rear tyre in 1977 but the front tyre must be around 55 years old!
Newer Post Older Post Home