John from the UK sent a few pics (above) of a very nice 1931 CS1 Norton (supplied to Godfreys, Croydon branch in August '31) which in the Works Records (below) is described as 'Special for the Manx Grand Prix'; so what does this tag indicate? 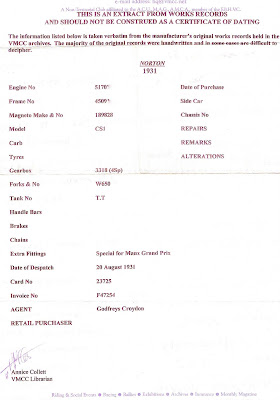 -SG- This bike has been nicely dealt with but there seems to be a few 'modernising' things done to it.  The forks  (according to the records) should be TT Webbs ("W650"); it has later forks and front wheel from an Inter.  The rear wheel should be Enfield and has been changed for a Norton one. It has been fitted with a Norton clutch rather than the six spring Sturmey Archer type. The hairpin springs are also later of course.


It is a sister machine of the three all listed together as despatched in time for the 1931 Manx Grand Prix (MGP) and in my view, it cannot be seriously described as an 'ex works' 1931 bike.  These differed in several respects as can be seen from the various 1931 TT (TT as opposed to MGP) photos which have already appeared on this website.


Another of these three MGP machines was despatched to L P Driscoll (apart from being a Brooklands regular of great repute, he also had a motor cycle business in West London) though it is not known to whom he supplied it. And the last of them is known as the 'Ron Harris machine' (see the two pics below) which had engine number 51709 and four speed gear box number  3317 (very close to John's CS1). This also had TT Webbs rather than Nortons own forks and was quite carefully researched by Titch Allen. Titch in his younger days was well known as a  'just get it going' sort of bloke (steel tape round fork spindles, bits of Meccano etc.) but he used his many contacts and long experience in diligently researching his later life projects. It is now in the National Motorcycle Museum accompanied by a rather fulsome and inaccurate notice (no surprise there, then!).

Basically I don't think the Harris bike or the other two despatched at same time were 'works bikes' as such: just specially built CS1s for use in the MGP by favoured runners.  I think one has to remember that it was only two years since all the fuss about cheating in the Amateur (that is, the fore-runner of the MGP rather than the TT itself) and although the rules were made rather simpler with the coming of the MGP in 1930 (below), I suspect most manufacturers were twitchy about being too blatant in their support. 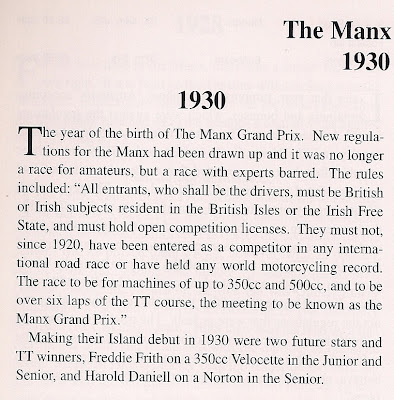 My view is simply that 'Special for Manx Grand Prix' means just that - special work done on it to make it faster/better than an over the counter two or three stay framed CS1.  If it was a TT machine (so not an MGP machine) or to TT spec. then the records would probably say so: there are several despatch book entries which say 'TT Specification' in the early thirties.  So, even if there were three special specification Nortons in the '31 MGP it does not make them true Works bike replicas.  What was so special about them anyway?  At this range it has to be guesswork but the four speed boxes would be one aspect and doubtless the engines were fairly, if not fully, up to the minute.


Not far above the entries for the three bikes for the MGP are the entries for the actual works TT bikes with their registration numbers - all are shown as being fitted with special '31 TT forks. These '31 TT forks were made by Nortons with a damper knob each side of the lower spindle.  The production Norton forks in '31 did not have this adjustment facility.  Fitting the TT Webbs - superseded as far as the works bikes were concerned - which also have adjustment of the damping via the wing nuts on the lower links would give the riders good forks without risk of criticism from the authorities or others that the bikes were Works TT bikes.  In many respects - forks and wheels excluded! - these three bikes would be like early versions of racing spec. Inters which were introduced at the '31 show, just a few weeks down the track. Incidentally the works bikes for '31 did not have Enfield rear hubs - see the pics - which also show the works forks.


As to who actually rode John's CS1 (or the one supplied to Driscoll) in the MGP event - or if it even competed at all - is not easy to tell; careful scrutiny of all the race reports (below) and pre-event articles possibly tells which club the various riders belonged to and supply of this machine to Godfreys Croydon might mean the rider was a member of a club local to Croydon - ie South to South West London area.