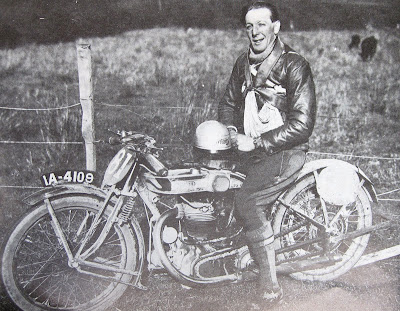 -JdK- Joe Craig depicted on his Model 18 Norton after winning the 1923 Ulster Grand Prix. Note the sloping fins on the cylinder head and the Druids; one year later Webbs were fitted.

-SG- Joe had four successive wins in the Ulster, starting with 1923, his bikes were all 490cc Model 18s. The one shown above was loaned to him by a friend, his 1924 mount was a personally owned Model 18 and for 1925 and 1926 he had works Nortons. The Ulster race organisers had four capacity classes - 250/350/600 and over 600cc. The 500cc machines competed in the 600cc class, as did a few 588cc machines, although some of the latter also competed in the over 600cc class. Initially the principal award was for the winner on a handicap basis, taking into account all the competitors, although there were subsidiary prizes for the fastest riders in each class. This idea was not wholly successful however and was dropped in 1926 although re-introduced on a modified basis in 1931. Those who want to learn more on the rather lengthy subject should obtain 'The Story of the Ulster' by Geoff Davison, published in 1949.
Newer Post Older Post Home