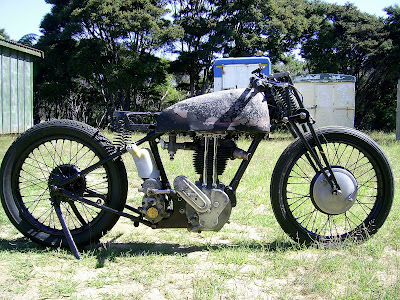 -SG- News from the Back Blocks of New Zealand! Artie sends the attached photo of a pre-war Norton special he is putting together for Inia Taylor to use in Vintage Racing events in New Zealand. The bike has been nick-named 'HE TANIWHA ' - Maori for The Swamp Monster - as the 1930s frame was indeed rescued from a bog where it had been half buried for decades. It says something for Norton quality that it is still useable. The engine is a 1932-ish Model 18 with a 1930 Norton Speedway head (note the flange mounted carb.) Internals are a closely guarded secret but it does use ES2 cams and the 1938 to 1946 flat cam followers. Some porting work has been carried out on the head and engine plates came from a thirties 16H. The gearbox is a Norton four speeder and fork blades are actually Velocette Webbs, the orginal Norton type having corroded away long since. Front wheel is mid thirties Norton and the rather flash front brake back plate comes from a full width hub BSA wheel. And the alloy tank........source unknown! Should make an interesting machine and hopefully it may be up and running by the time of the next Classic Race Festival at Pukekohe in February 2012.
Newer Post Older Post Home