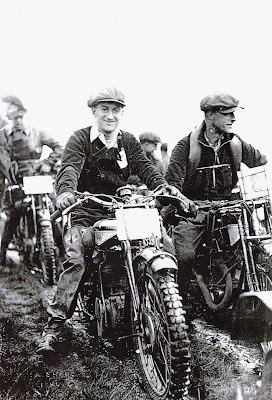 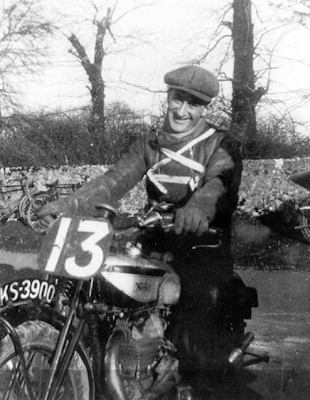 Back in June 2010, we had a photo of Stanley Woods and a Moore CS1 with registration number KS3900 (reproduced above) and here is another - courtesy Motor Cycling Ireland. Stanley's letter to Paul Adams, also reproduced last June,  mentions this particular machine although he does not give the registration number. Then we hear indirectly from David Crawford in Ireland that KS3900 was a favourite bike and that when Stanley left Nortons in 1933 he was a bit upset at having to give it back! Perhaps Nortons were peeved at his leaving because a five year old and fairly standard CS1 would not have had a great value to the factory at the time and it does seem rather mean-spirited to ask for its return.

However, a further link to this machine is the comment in Stanley's letter that, before it was 'issued' to him in September 1928, the bike had been given to Jimmy Guthrie - a new boy to the Norton team in 1928 - so that he could learn to ride a Norton! Stanley also mentions that it was an ex-show machine.  However a search of the records did not come up with any CS1s from the tail end of 1927 with any indication that any of them had been show bikes nor could I find one with Norton Motors shown as the Agent in the relevant column in the despatch books -  an occasional method of entry used when machines were recorded in the system but remained Norton property.

I therefore decided to check on the registration number - issued in Hawick, Guthrie's home town. After an initial set-back (Hawick Museum records stop with KS3748) I finally got to the frame and engine number from brief records held by the Kithead Trust. These were engine number 378xx and frame number 311xx, and a copy of the Kithead record card is below. Note the last owner! What happened to the bike after its return is anyone's guess - it may have been sold to one of Norton's more favoured dealers and re-registered, or just scrapped. 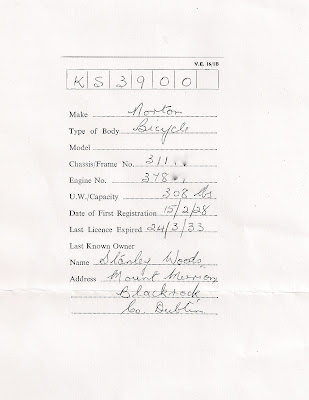 So, back to the despatch records again and there it is  - in a section written by someone with the most diabolical writing which is my only excuse for failing to find it before - despatched 11 Feb 1928 to J Guthrie, Hawick. No extra notes that it was anything other than standard, apart from a ribbed front tyre.  No mention that it was an ex show bike either but the short cryptic comment 'For practise prior to TT', thus confirming what Stanley said in his letter to Paul some fifty eight years later!
Newer Post Older Post Home