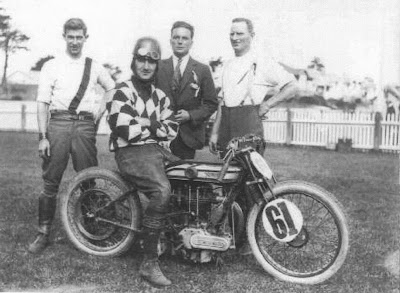 The recent photo of H.Moller and the works 1926 Norton ON6793 has prompted a comment from Ken in New Zealand regarding Moller, accompanied by another photo (above) taken somewhat earlier (probably 1924-ish) showing an 'oil in the fuel tank' Model 18, which was possibly one of the earlier imports of an OHV Norton into NZ.

The H initial apparently stood for Henrik - although sometimes shown as Henri and sometimes as plain Henry - and Moller is sometimes Moeller. Be that as it may, Mr M was of Danish extraction and a keen Norton rider as well as a successful businessman. His enthusiasm for the marque may be gauged by the fact that one of his children was christened Norton! It appears that his racing activities in NZ in the twenties were centred on grass track events - which at the time were held on horse racing courses. He achieved some pretty good times too, for instance ten miles at the New Plymouth course in 8 minutes 41 seconds in the 1926/7 season while a year earlier he had managed 8 minutes 40 seconds for the same distance at Opotiki. His business prospered and ultimately represented Jaguar, Citroen and Yamaha.
Newer Post Older Post Home