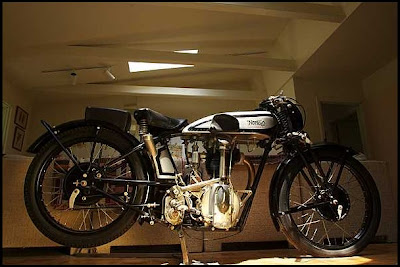 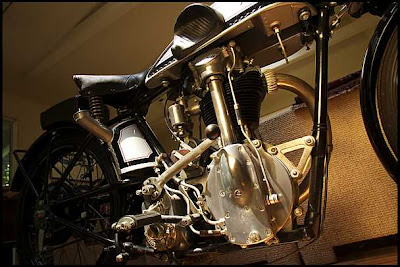 Coming up for auction in the USA. The description below comes from the auctioneer's website. It may have been at the Isle of Man at one stage of it's life, but there is little to suggest this is a works machine.

Simon: "This is not a TT bike and has no connection with the event as far as I can see from a quick look at the records. The frame and engine do not belong together for a start - engine nuber 41859 originally formed part of a very standard CS1 (equipped with dynamo) supplied in December 1928 to a dealer in Kendal (now in Cumbria) who in turn supplied his customer in Feb. '29. Customer's name is illegible. Frame number of this bike was NOT 30323! A look for the frame number 30323 shows it dates from January 1928 when it formed part of an ES2 supplied to Yorkshire dealer Dan Bradbury. So all in all, a composite bike which looks quite well presented even though the restorer has given way to temptation and plated the brake arms!"