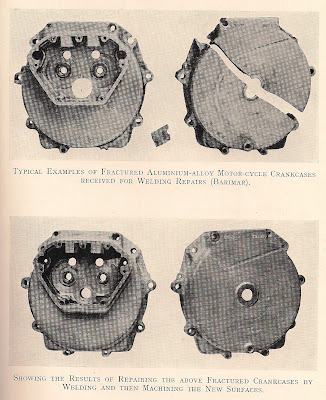 Vintage Norton connecting rods - with 5/8" diameter gudgeon pins - have a reputation for fragility but I suspect they were no worse than any others at the time. Here's a Barimar publicity photograph showing before and after views of a repaired 1930 Model 19 crankcase. The damage looks typical of that caused by rod breakage. And in case anyone thinks this was a high milage elderly machine let me add that the photos were taken in 1932 or 1933 at the latest. The engine number 47348 belonged to a Model 19 supplied in April 1930 equipped with a ribbed front tyre and 3.50 x 19 rear tyre so presumably it was for solo use. The unlucky owner - if he still had the bike at the time of the blow-up - was a Mr H S Norton of Kings Heath, Birmingham......a member of the family? Or perhaps not: Norton is not that rare a surname!

Roger: "I am not convinced that the damage to the nearside crankcase was caused by a broken rod poking through the side. Although I could accept that a short rod (as in broken) could punch a hole at the front of the engine I am less sure that it would generate enough upward force to fracture the case in that way. Perhaps there is a different explanation for the damage and the clue might be the broken lug on the bottom of the offside casting.  If the machine had been involved in an accident with the main impact on the nearside top of the crankcase it would cause the damage shown in the pictures including breaking the nearside case in half as there would have been a horizontal component to the force."

Simon: "Whether or not rod breakage caused the damage is difficult to tell nearly 80 years later.  I can tell you that this is the third crankcase I have seen with breakage across the drive side main bearing and one of them belonged to me - and was caused by rod breakage, not gudgeon pin, just below the gudgeon pin. My breakage also shattered the lower rear of the barrel and wrenched it from the c/case. It was left hanging on the exhaust pipe! The chap folowing me at Brands Hatch complained afterwards he was showered with bits of hot metal as the piston disintegrated also!  For what it's worth (not much) the third crankcase broken in this way belongs - still - to a 1926 Works engine belonging to a former Norton team member from the Duke era.  It has also been welded up but not as neatly as the Barimar job.   I did some work on it for the owner about thirty years ago...."
Newer Post Older Post Home