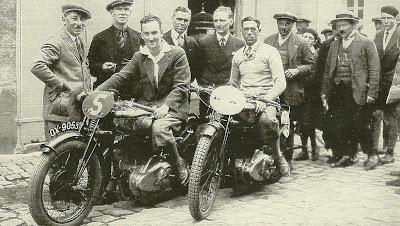 Clearly Stanley Woods, don't know the other rider. Lucien Psalty (Norton's agent in France) is on the left. The picture was taken in France c1929. The machines are CS1 Nortons. Note the right hand exhausts and extra long footrests as fitted to the racing machines.

-SG- Having had a look at photos on the Internet and elsewhere, I think the unknown rider may well be Pietro Ghersi.  Ghersi, famous as a racing driver in the thirties, also rode bikes with considerable success in the twenties and towards the end of the decade seems to have ridden in a few events on works Nortons.  Indeed, against one of the 1928 TT machines listed in the records  (all shown as being 'despatched' to Norton Motors on 22 May 1928) is the note: '21 June 1929 - sent to Mototecnica (Norton's Italian agents) for Ghersi.'
Newer Post Older Post Home