A letter from Pat Driscoll 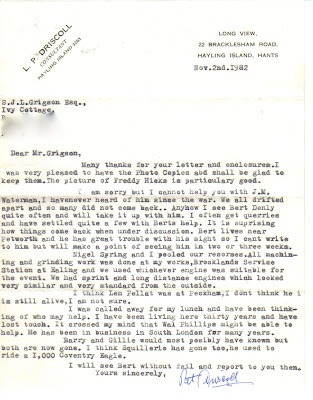 Hayling Island is where Pat Driscoll lived after the war and where I went to see him in the eighties. Driscoll's memory was excellent but it was not clouded by subsequent years working on other bikes.  Basically, it was all Nortons only!  Although the direct question was not asked he gave no indication as to the extent of his involvement or the fact that he - as deduced by Roger in his book - basically did all the engine work for the bikes Nigel Spring ran at the track.  Oddly enough, I came across a letter (above) a couple of weeks back from Driscoll to do with a question I had sent him re. my Brooklands Coventry Eagle.  I must have also asked him a Norton related question because in one short sentence he confirms he indeed did all the engine work for Nigel Spring!

Regarding the mods Driscoll made - the long (8 1/2") con rod idea did not come from Driscoll. It was current practise at Brooklands and was almost certainly something emanating from the highly successful Chater Lea tuner and rider, W D Marchant.  This - conveniently - ties in with the fact that the 8 1/2" rods were made for Spring/Driscoll by Chater Lea.  Driscoll told me the idea was not so much to increase speed as to increase reliability as it reduced the angle of thrust on the crankpin and also - to quote him - 'reduced piston scuff.'  The selection of the 8 1/2 " dimension may have come from Driscoll or Spring or someone else.  Whatever, it was an inspired choice as it allowed use of the same high compression piston in either a 588cc engine or a 490cc engine, despite the 20mm stroke difference.  Other tweaks are more basic - the long dwell IT cams were, it seems, used as well as steel ES2/CS1 type flywheels.  There seems to have been no change to valve sizes although I expect they used better springs than those available to the public.  It may also be that thicker walled crankcases and cylinder bases were used but this, again, would be to improve reliability.  There is little doubt that LPD (Driscoll) was a whizz at balancing too and managed to make the Nortons turn over at high speeds for long periods with considerable reliability. Driscoll did not as far as I have ever heard get involved atall with the CS1s - this was all done at Birmingham for road racing with comrades Moore and Carrol.
Newer Post Older Post Home