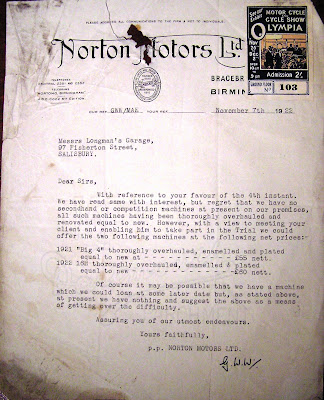 Simon:
"This letter from Nortons is noteworthy from two additional points of view:
1. It is signed by GWW who was of course Graham Walker working for Nortons at the time.
2. About twenty years ago my next door neighbour was a nephew of Mr and Mrs Longman and he told me in no uncertain terms that he and the family were not too enthralled with the behaviour of one of Longman's employees, who, after Mr Longman died, was allowed to carry on the bike side of the business while Mrs Longman occupied herself with selling paraffin and charging accumulators (for radios etc).  Basically, they felt this chap - also now dead - took unfair financial advantage of Mrs Longman's good nature.  My neighbour also said that when Mrs Longman finally toppled off the perch, it took him and his cousins three weekends and several skips to clear all the motor cycle stuff which, he said, 'nobody wanted.'  This I find hard to believe as I believe Mrs Longman died in the seventies and there would have been plenty of people interested had the right contacts been made. As the saying goes, enough said!"
Newer Post Older Post Home