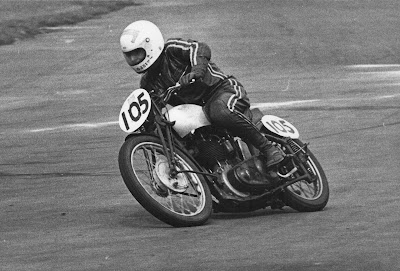 East Fortune, 28th April 1974; a fun day out on Drew Taylor's 1937 ES2 Norton fitted with a Francis Beart dope Manx piston (14 to 1 CR on methanol) and a Rudge Ulster front wheel...  The story (there's always a story!!) was that as we were warming the bike up in the paddock before the race, the plug oiled up and we needed a change of plugs before I could go out of the paddock to the start grid.  Now any normal racer would have a normal plug and a normal set up, but not Drew Taylor!!  The plug was (for sentimental or maybe good luck reasons) the actual plug used by Jock McCredie in the 1947 NW200...  I thought he must have won that race but I just checked and he wasn't even mentioned..!!?

The plug (a Lodge racing plug) had a large brass ball screwed on the top and the plug cap was a special Lodge racing cap to match the large brass connector.  We didn't have a spare plug with the same set up, so we not only had to change the plug, we also had to rob another bike's plug cap and change that as well.  I got to the paddock exit and the marshal initially refused to let me out onto the track, but relented and I shot round to join the back row of the grid, only to find the race was already under way and I was playing 'catch up' instead of 'follow me'!!  To cap it all, on the third lap I lost the nearside foot rest so rode the rest of the race trying not to put all my weight on the rear brake!! Look closely at the pic and you will see the missing footrest, or rather not see it!!

I think a few people took pics of me as a back marker because I was trying so hard I nearly chucked it up the track on several corners... You can also see the cement on that corner where oil spills had been 'treated', lethally slippy as a result.  You can also almost read my Bell full face helmet script which reads 'Ecurie Ossity'...
Newer Post Older Post Home