By Simon
Until the cradle framed CS1/ES2/CJ/JE models were introduced in the late twenties, the vast majority of all Nortons produced from 1915 up to and including 1930 were fitted with the Sturmey Archer CS type gearbox. The exceptions are the single speed belt drivers (before anyone picks me up for not remembering them!), the four speed models with the cross-over drive box introduced in the mid twenties, and the few, mainly racing, machines fitted with the Heavyweight (HW) LS type gearbox. 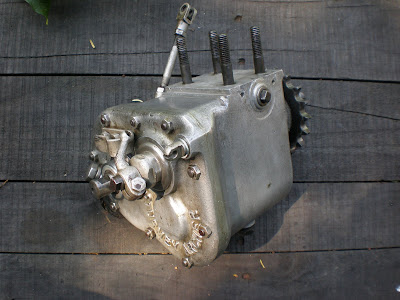 The CS box (above) was Sturmey Archer’s first motorcycle gearbox and was designed by ‘Ike’ Cohen. Although there were changes to the gearbox casing, gear pitch, clutch, final drive bearing and kickstart over the next fifteen years, the basic design remained unaltered. Having worked on quite a few CS boxes over the years, I can say with certainty that they seem to last surprisingly well, and certainly better than the later LS design. Their disadvantage of the CS is their sheer physical size in that the kick start gear and mechanism is housed in the casing extension to the rear of the box. One of their advantages to Norton restorers lies in the fact that all CS boxes including those fitted to machines made by other manufacturers, have the same method of attaching to the frame and the same chain line, so for instance, a gearbox casing from 1928 will fit a machine from 1918. 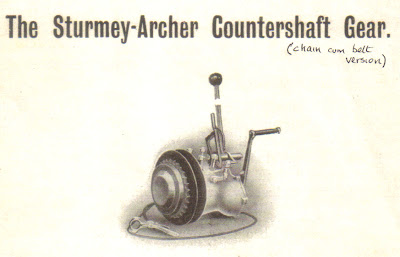 The earliest examples used by Nortons were all chain or chain-cum-belt, depending on the model, and an illustration from the 1916 Sturmey parts list (above) shows what they looked like. The clutch was a six spring design (taper fitting to mainshaft) with 30 teeth 5/8 x 3/8 and the gear change was mounted on two lugs on the casing. According to S-A literature, in 1916 and 1921, there were detail changes to the clutch and in 1920 changes to the gearbox casing – see illustration 1 which shows a 1927 example – which co-incided with the introduction of the disc type gear-change mounted on the seat tube.

For 1926, the gear pitch was changed from the original 12 to 10. This had the effect of strengthening the gear teeth and radically altering the number of them. With the earlier gears, the teeth on any pair add up to 50, while with the later type the teeth on any pair add up to 42. At the same time the single spring clutch originally designed for the LS gearbox was fitted. This had 34 teeth 5/8 x 3/8 and continued in use until 1928 inclusive. Its use necessitated a change to the mainshaft as it is a spline fitting clutch. The diameter of the k/s axle was also increased for 1926, going from 5/8” to ¾”.

1929 saw the next alterations, with a change to the clutch – still single spring but now ½ x 5/16 42 teeth - and to the clutch worm/housing – increased in size and given a felt seal. At the same time the gear change mechanism was simplified and re-located to an inverted tee shaped bracket fixed to the top of the gear box casing. Final drive sprocket changed at this point also to 5/8 x ¼ from 5/8 x 3/8 previously used.

Then we come to the final year of CS gearbox production – 1930. The casing was slightly changed in that the letters of the Sturmey Archer name were now recessed into the end cover casting rather than raised. The kick start axle diameter was again increased, this time to 1 ¼” , and the kick start mechanism internally strengthened and improved. The kick start axle fitted to Model 20 twin port machines was extended to clear the right hand exhaust pipe. Many 1930 Nortons were fitted with the same type of gear change as for 1929 but the fashion for tank mounted gear changes meant that many more utilised this latter system. This did not affect the gear box itself except that the two studs on the upper casing to carry the ‘change on box’ mechanism were omitted and the actual change lever on the gearbox was a different length.

Without going into too much detail, it is worth mentioning that a racing version of the CS box was used on a few Nortons in the early twenties. This had no rear extension housing the kick start mechanism. I have never come across any literature about this gearbox although it appears in the earliest catalogue illustrations of the Model 18. It is recognisable in that, although it resembles the HW LS gearbox, the filler plug is on the left of the end cover rather than the right. I know of but two of these – one fitted to the decidedly pseudo racing 16H outfit built back in the sixties by the late Bill Fruin which carried number CSTT11 and another in private hands (no, the owner doesn’t want to sell it!) bearing number CSTT298. There may well be a few others but the despatch records do not give any clues as gearbox numbers were not inserted in the ledgers at this period. 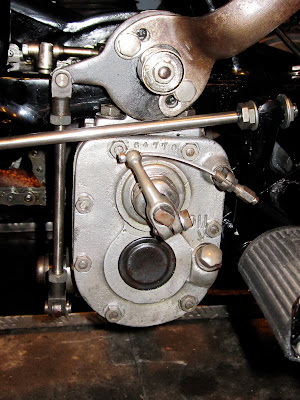 The HW LS gearbox (above) fitted to certain racing machines from about 1923 onwards was far more compact – it contained six pinions to provide three speeds (and a kick start when fitted) while the CS type contained eight. A change from the four stud top mounting method to the familiar top and bottom pivoting system (below - a Norton patent incidentally) meant it could be used for the cradle framed models when they came along, as mentioned in my opening paragraph. (The CS1 box below is missing the pivot stud which fits into the gear- change disc and on which the upper clevis should pivot. This is part number 4652 in the CS1 parts list and quite an important little item. Its official description is 'gearbox control quadrant stud.' Also the rod which links the g/change to the arm on the box has a bend in it rather than being straight as appears in the photo). Regrettably, the LS box does not last well with dog wear often causing the box to jump out of second gear at inconvenient moments. 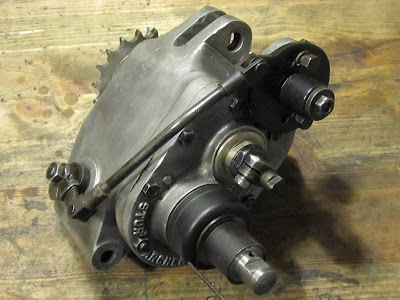 The clutches used on these cradle framed machines differed – the ES2 and CS1 models being fitted with a four plate clutch (1/2 x 5/16 42 teeth) while the CJ and JE used the same three plate clutch as fitted to 1929/30 Model 18s etc.

Much more information has been gathered over the last fifty years as regards the different gear sets which were available and other technical changes which took place. If desired, these could form the subject of future easily digestible screeds!

Find out more about assembly of these gearboxes by following this link.
Newer Post Older Post Home