-SG- I see the new entry about the 1925 (???) TT Norton - along with the Classic Motor Cycle article and associated letters.

While the re-build was of high quality I have to say that the result bears only a superficial resemblance to the original. A photo of one of the works bikes from 1925 has been published before on the blog but here (above) it is again for easy reference. Also, here (below) is a rather poor photo of Bennett in the paddock at the TT showing the bike with practise number plates and forks as fitted to the works machines. Why the bike was fitted with braced forks for the TT itself is anybody's guess. Just for interest, a copy of the original registration details of the bike is also attached: these are unusual in that it was registered by Bennett himself in Southampton rather than by the works in Birmingham. 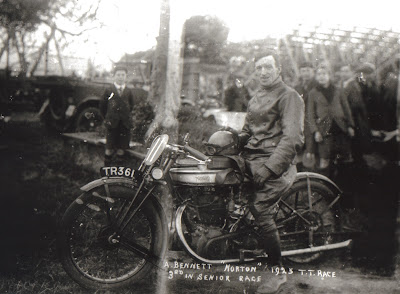 One does not need to know much about Vintage Nortons to see that there are many differences between the 'works' photo and the bike now purporting to be the Bennett machine.

The main difference relates to the frame - that used in the re-build looks to me to be 1928 and the caption to the photo in the CMC article stating that the steering damper lug on the top tube of the frame had been added by a previous restorer is surely a very feeble excuse. Further, the '25 frames still retained the rather archaic system of mounting footrests, brake pedal - and oil pump pedal - on the short tube protruding downwards from the gear-box lug. This tube and associated hardware is nowhere to be seen on the re-build. 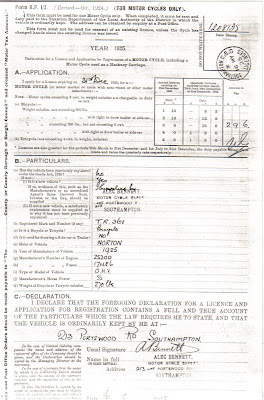 Other differences between 'then' and 'now' seem to be - forks and front wheel: OK, so braced Webbs are very thin on the ground but the ones used look to be standard 1925-ish Webbs and not the type used on the works bikes which, exceptionally, have the brake cable stop on the front of the forks to suit the Horton hub brake-arm. The front hub looks to be standard for the period and not the Horton type. Standard fuel and oil tanks are now fitted and the supplementary chain oiler tank is missing. The saddle is of the wrong type. The cylinder head is fitted with the 1929 type of exhaust valve lifter mechanism - a small point, agreed!

All in all, the only parts of the bike which I believe to be genuine are the crankcases!
Newer Post Older Post Home