From "The Motorcyclist Review, August 1927". Sent by Simon. 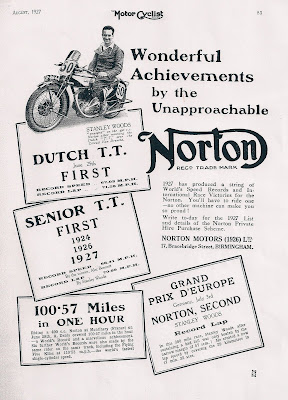 The Motorcyclist Review was a monthly paper which ran from about 1925 to 1930. There is a full set of them at the British Newpaper Library in North London, where many other periodicals of interest can also be viewed - free! The CS1 on which Stanley was 'snapped' after his Dutch TT win carries the registration number OP8644 which is the number of the CS1 featured in the Motor Cycling road test of 9th November '27 and the 'Racer in the Rough' article from the Motor Cycle of 17th November '27.
Newer Post Older Post Home