The "Best" automatic oil pump as fitted to this and this Norton.

I first came across these pumps as part of my research into Duzmo Motorcycles. I have a 1922 500cc OHV engine that I am building into a complete motorcycle, which uses this type of pump. I have an example on loan, but as the casings are made of Mazak they have disintegrated. Duzmo first used these pumps in around 1920, which seems to be when they first hit the market. They used them right up to the end of production in 1923 and it doesn't look like the pumps stayed in production for much longer after that. 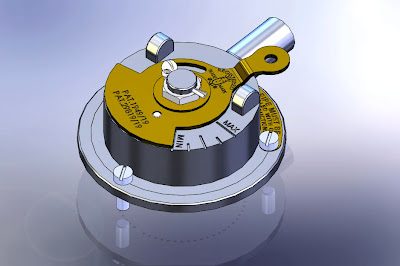 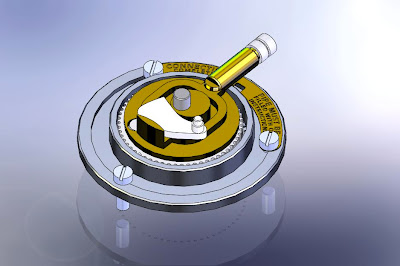 I have been 'reverse engineering' the pump over that last couple of years and am close to testing first prototype with ‘dummy’ Perspex outer case. I am a mechanical design engineer by trade and I am in awe of the designer who invented this pump ninety years ago on a drawing board (see images above). 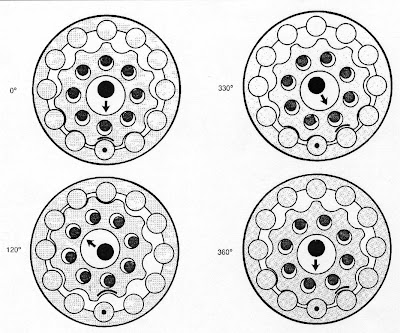 In the case of the Duzmo, the pump is driven at half engine speed. Internally it consists of a 'planocentric gearbox'. This consists of an external ‘gear’, which really has 59 cups rather than gear teeth around it’s perimeter. This is rotated on the eccentric input shaft and as it sits in an internal ‘gear’ which has supported pins rather than teeth, 60 in number, it orbits around. For every revolution of the input shaft the internal gear moves around by 1/60 of a turn. Therefore the designer has produced a gearbox with a 60:1 reduction in one step - quite an achievement (above).

The internal gear has a peg, which drives a disc with another eccentric on it. This is used to drive a plunger and seal of around 5/16” diameter. However the designer was not content with his neat gearbox alone and by means of an external lever and ‘wedge’, has devised a way of varying the stroke of the plunger. 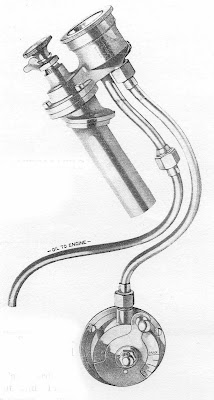 A single oil pipe is connected to either a T piece with two one way valves, which is fitted between the standard hand oil pump and sight glass or to a single pump/sight glass that has the one way valves fitted in it (above). 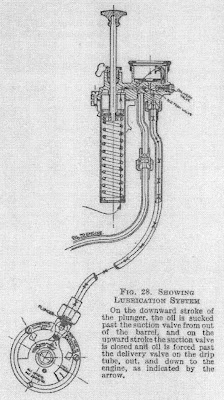 As the plunger in the automatic pump is withdrawn, the oil in the connecting pipe (which must be filled with oil at all times) is drawn down the pipe displacing the same amount of oil at the one way valve from the reservoir. As the plunger returns, the same oil is pushed back up the connecting pipe, but this time is forced through the one way valve en route to the engine. (above)
Once I have established that my reverse engineering is up to scratch and the pump is reliable, I will be making a small batch. The hair spring I have in my example is broken and I only have part of it. If anyone has a complete spring or is interested in one of these pumps please get in touch. You can find out more about Duzmo and some of my other interests on my website.