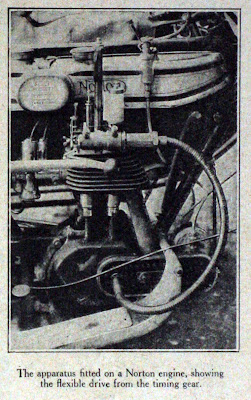 A cutting from one of the old Motor Cycle magazines, does anyone have the answer as to what this is? Some suggest it may have to do with water injection or some sort of dual fuel set-up, a war-time bodge due to fuel shortage? It seems to be fitted to an early 1920s Big Four Norton.

Roger: "I think we can rule out the dual fuel idea as this would require a large gas bag or a generator unless there is a sidecar hidden at the back of the picture. In any case there isn't a mixing chamber or feed to the carb.

The water injection idea would not require timing as the vacuum from the down stroke on the inlet cycle would suffice and the reservoir is too small.

The answer may lie in the absence of valve springs, there is a cylinder where they would normally be. How about a desmodromic side valve conversion with the valves closed by the contraption driven from the exhaust cam, operating push rods going down through holes bored in the cylinder finning. This would allow direct operation of the closing pushrods by a lobed cam in the top assembly. Lubrication of these cams could be via the reservoir which would feed oil to the "apparatus" while the camshaft bearings appear to have greasers.

Given the overhead valve conversion featured earlier this may not be as far fetched as it seems!

There is a fatal flaw in the design however! The drive uses a Bowden type cable which was probably intended for driving a speedometer from the look of it. The Ford Focus uses a similar cable in torsion to open the bonnet with a key. The one on our Focus failed after three years because it couldn't stand the repeated changes in direction which for opening the bonnet is not that many times. The cams would place a similar load reversal on the cable especially if a light spring is used to hold the valves closed."