Nystrom on a c1926 racing Norton 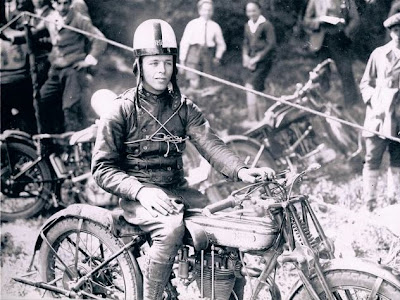 Here's another photo from Sweden. It shows Per Nystrom on board what seems to be a 1926/7 racing machine - sadly the photographer has concentrated on the photogenic Mr Nystrom rather than the lower half of the bike! However one can see TT Webb forks and just behind the carburettor, part of the oil tank lug as fitted to Model 25s and works bikes with large oil tanks. He must have fitted a smaller tank for some reason. I guess the photo was taken in '28 as there is an ES2 in the background.

I suspect it is a Model 25 but cannot be too sure. The only indication is that little bit of oil tank support lug one can see. But those lugs were fitted to ordinary frames as well if the customer wanted the large oil tank fitted. Nystroms seem to have had a very good relationship with the factory and had various cast-off racing bikes over the years which they used in local events to very good effect.
Newer Post Older Post Home