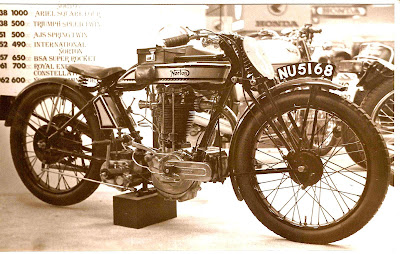 Another contribution by Martin: " I have scanned another tasty Norton. It was photographed many years ago at the Racing and Sporting Motorcycle Show at the Horticultural Halls in London, around 1972. There was a display of machines from the Richards and Wallington collection, and this one was particularly attractive. Roy Richards was later to set up the National Motorcycle Museum which subsequentloy burnt down in the famous fire, so not sure if this fine machine survived. It is the 588cc racing flat tanker raced by legendary Norton man Ernie Searle in the North West 200 race where up to 600cc engines were allowed. It dates from 1925 I think. Some suggest that Ernie gave his name to the ES2, as ES is supposed to stand for Ernie Searle, but others think it stands for Enclosed Springs as the pushrod return springs are enclosed in little tubes, but who knows for sure this long afterwards.

...JdK; Titch Allen in his Norton Story suggested that the 'E' stands for 'extra cost' , the 'S' for sports and the '2' for second sports model when the Model 18 was the first.
Newer Post Older Post Home