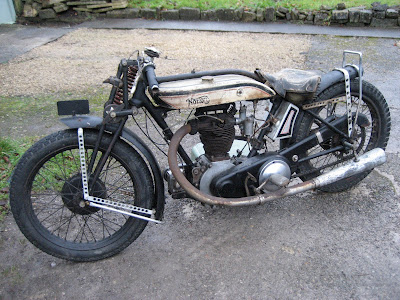 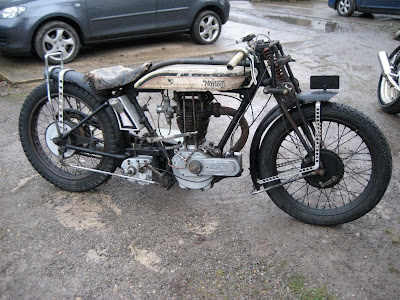 Simon from Bath in the UK sent these photo's of his Norton: "Here's my 1927 Norton 18, recently imported by me from New Zealand where it had been raced until the late 1940s. It's got a spare engine and a spare close ratio gearbox. I'm tempted to get it running and road-legal with the minimum of restoration"

JdK: It must have been built late in 1927; the small casting on the top frame tube to connect the steering damper is typical for 1928 machines though the square oiltank is 1927.

...and a comment from John in New Zealand: "Being from New Zealand I find today's posting particularly interesting. How the hell did Simon sneak that out of this country from under my nose? He is a lucky man, as are all of us who have a flat tank Norton of course. Mine is of a very similar age and also has the flat side oil tank and the stud on the top frame member for the steering damper. What a lovely example he has, mine had also been raced, rattled and rolled, the condition of Simon's being somewhat better than what I started with. I had mine dated a while back: mine left the factory on August 27 1927 as one of the first 1928 models, Simon's appears a couple of 100 or so later than mine number wise. But it would appear to be correct to date it as late 1927."
Newer Post Older Post Home