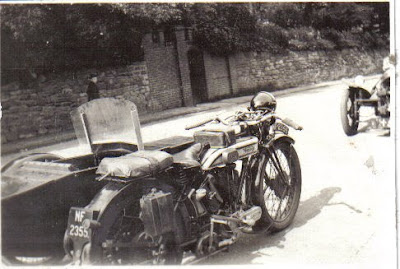 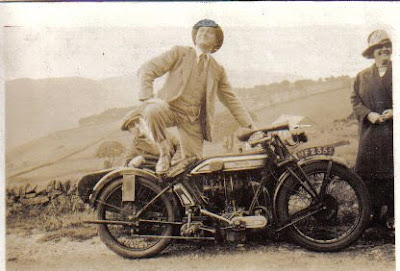 Another few magnificent photographs from Howard. Twice the same bike but on different occasions. It's a circa 1926 Model 18 combination and it looks like the outfit was used for some serious traveling.

Roger: "The Manchester registration dates from late 1926/early 1927. I suspect that the one in open country was taken when it was fairly new and that the owner is sitting in the chair. The older couple are probably his parents which is why the man is standing on the saddle, no rider would do that to his machine. They must have travelled in their own transport as the chair is a single seater and there is no provision for a pillion. The second picture was presumably taken at home and there is a lovely wheel of a Morgan in the background. The large bulb horn has disappeared and the headlamp may be different."