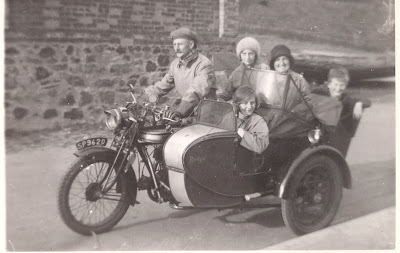 Another great photo from Martin in the USA, where does he get them!?

Martin: "Since you have been posting sidecars I thought you might like this one. Not a very good pic of the Norton but I feel there is enough information to make an identification. The Rudge sidecar looks special. What should we call this? A "fore and aft"? I love the man's jacket and gauntlets! The back of this unused card only says, "the family" handwritten in pencil. It sure looks like a happy Norton family"

The shape of the tank identifies the machine as a Big Four model and by the look of the handlebars and the size of the front break drum I would suggest it was made in 1924.

Roger: "1924 could be quite right as the Fife registration is from late 1924. The tax disc is visible and isn't banded but this probably means that it was a quarterly one as only the annual ones were banded. The sidecar looks as though it has grown with the family and that may be why they needed to step up from a Rudge to a Big Four."

Martin S.: "The SP registration number was issued in Fife, Scotland and the last such number (SP9999) was issued in April 1925, so the Norton is probably a 1924 model. As a long standing Rudge owner as well as Norton owner, I checked and scanned (below) the relevant page from an original 1922 sales catalogue which shows a tubular chassis and body very similar to the one shown in the photo, even down to the Rudge logo on the side of the nose!! The flat steel strip chassis was introduced from approximately 1925, whereas this one would of course be earlier than 1924 as it probably is on its second motorcycle! The extra seat in the nose is definitely a modification, with extra footwell as well... Cosy!!" 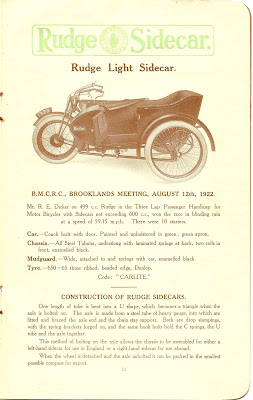 ...and Howard: "This Big 4 outfit has P&H lamps fitted including a pair of P&H side wings to the headlamp. I can also see the top of a Cowey horn bolted to the top tube of the frame. Both of these accessories are fairly rare and very expensive nowadays."
Newer Post Older Post Home