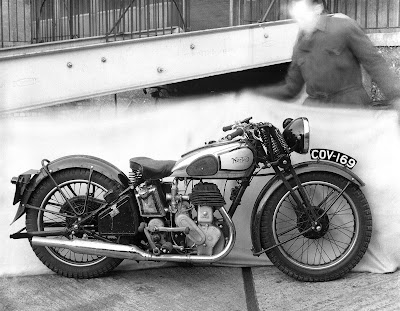 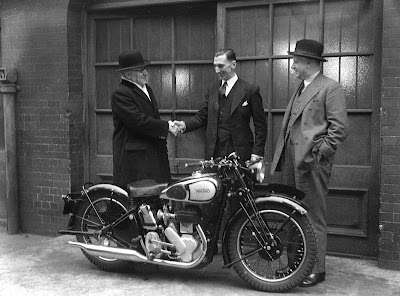 Two 16H Nortons; the one in the lower picture is a 1946 model, one of the last Nortons to be equipped with girder forks. The other 16H is a late 1930s model and at least younger than 1935 as the lock on the toolbox is on top; compare this to this 1935 model. Note the many other differences; the older model has an 8" headlight, paneltank, front brake on the left hand side, dolls head gearbox, oilpressure tell-tale...

The photo's look like factory shots to me; the white sheet was used to provide an even background. Does anyone know who the three gents are?


"I think the date will be 1936 or 1937, because it is fitted with the 2 brush dynamo system and regulator box fitted above the toolbox this first came out in 1936 and took over from the 3 brush type which had the half charge resistor in the switch and no regulator/cutout box. The engine is the redesigned type as it has the 2 small oil drain pipes in the timing chest. The flywheels are also thinner than the 1935 model and the valve cover has provision for greasing the valve guides. Cannot think the panel tank would have gone on longer than 1937"
Newer Post Older Post Home