This is a 1930 CS1 Norton that was entered for the 1930 TT races; the rider is Mr Tim Hunt. Obviously, the Norton has a Carroll engine in a three stay frame. The high resolution picture was copied from the April 2010 issue of "The Classic Motorcycle" and shows a few remarkable details I had not noticed before. 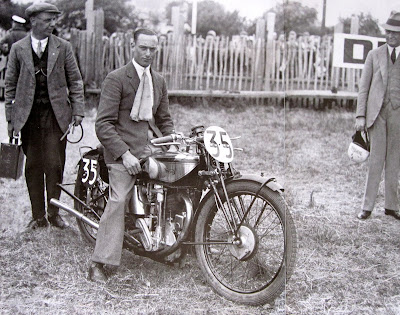 Both tanks are polished and plated in chrome or nickel as are the handlebars and clamps. It has inverted levers and a drum type twist grip throttle - a design that was finally catching on despite being introduced several years previously. Enfield rear brake plate appears to be plated and the front (Horton) is cast alloy. Spokes and rims are black and nipples plated. Rear wheel is 20" and front 21". The forks are Webb 650 - which in 1930 replaced the earlier TT forks used on Moore CS1s/ES2s. Note the rubber 'bump stops' fitted below the lower rear spindle - another Webb accessory.  The André steering damper is anchored to the top of the petrol tank. The engine appears to have an oil return pipe from cam-box to crank-case. The petrol pipe is 'Petroflex' - a rubber/fabric pipe with a spiral steel winding round it, much used for racing at the time. The magneto is a square body ML (Lucas were obviously out of favour with Joe Craig in 1930). The metal box in front of the cylinder contains oil to lubricate the primary chain. The racing gearbox - as we know now - is a three speed Sturmey Archer type N fitted with a positive stop gear change. Hunt's trouser is in the way of the rather strange foot-rest arrangement used on the 1930 works bikes.
Newer Post Older Post Home