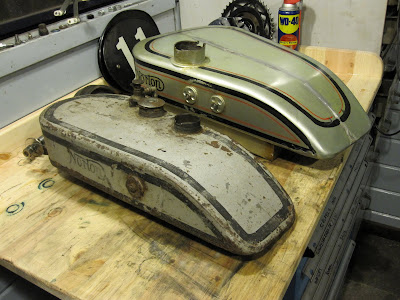 Many things grow taller in their lifespan; which also holds for the size of the petrol tanks fitted to flat tank Nortons. Comparing three tanks that were made in the early- and the late 1920s I found that all of them had an overall length of 58-60cm. However, their width varied dramatically and at their widest point they measured 23cm, 29cm and 36cm! 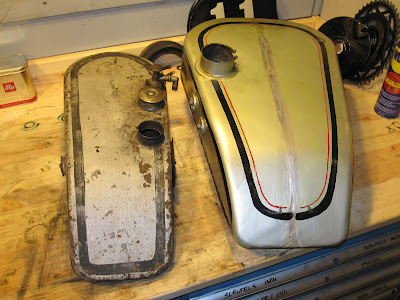 The picture shows the early 1920s tank next to the tank of the 1927 OHV machine that I have just bought. The large tank has a very large filler opening and a vent to allow air to escape upon rapid filling. The tank was enlarged by the addition of an extra compartment at the bottom. All of this suggest a tank that was made for use in some sort of competition.
Newer Post Older Post Home