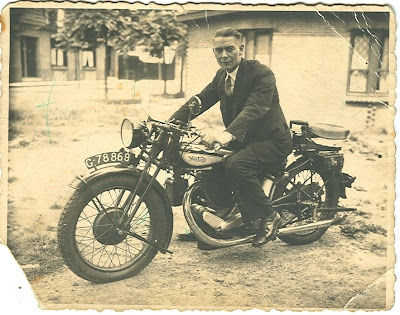 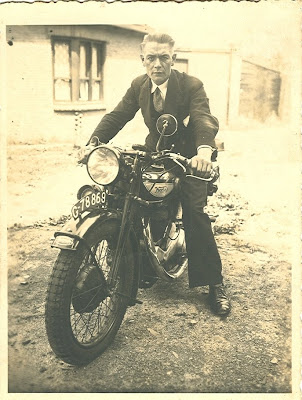 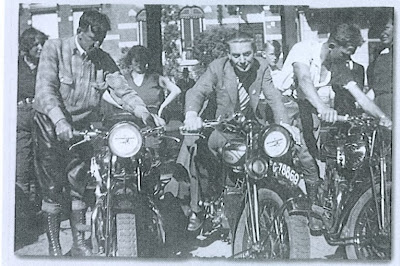 Cees Kloosterhof from Medemblik in the Netherlands, in the pics, was a keen motorcyclist. One of his bikes must have been a brand new ES2 Norton as the bike looks factory fresh.

It's a 1930 ES2, identified by the three stay frame, the Best and Lloyd oilpump on the timing cover, alloy chain case, forward mounted dynamo and Enfield 8" front hub. Exceptionally, the forks are Druids with enclosed central spring. These forks -the ES type- were standard wear for vintage CJs and JEs and it is Simon's guess that this bike is fitted with the next size up as those for the 350s would have been a bit light for a 500. Not many people fitted the ES Druids and Norton probably fitted them on request.

-SG- A close friend of mine - who toppled off the perch some years ago, aged 90 plus - bought a new ES2 in 1931 and wrote to Nortons complaining at the poor (compared to Webbs) damper adjustment facilities on their own forks. He got a polite note back saying they were excellent and - more or less- stop bothering us and p*ss off! He did - he sold the Norton which he said was heavy and sluggish and bought a 1931 ex TT OK Supreme JAP which was miles faster than the over the counter 1933 International belonging to a friend of his.....they used to have burn-ups on the then new Watford by-pass - the 30s equivalent of the 60s Rockers! Enough sentimental drivel.