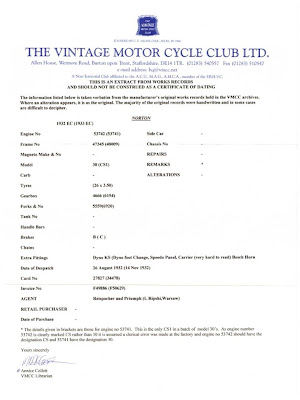 The VMCC archive holds the original Norton works records. These records can be searched for data regarding your Norton's engine and frame numbers. This results in extracts as depicted; the one below is for my CS1's frame (frame No. 446xx), the one above for the engine as currently fitted (engine No. 53742). 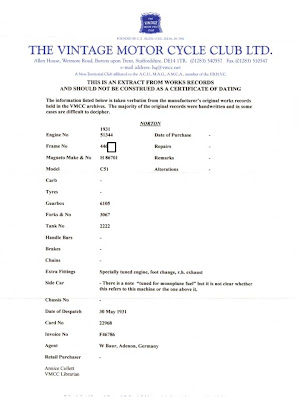 Clearly, the engine left the factory in another frame, but, the frame is a genuine 1931 CS1. The engine may be from a CS1 or a M30 International but that's hardly relevant as a later cylinder head has been fitted. The record for the frame indicates that the bike left the factory as a special, sporting a specially tuned engine, foot change and a right hand exhaust. I really like the remark about "tuned for monoplane fuel" which indicates it must have been fitted with a seriously high compression piston. This confirms again that the Norton factory was very easy on what they sold to the public; whatever you wanted and paid for you could have, which makes it hard to define what's 'original' or not.
This must have been one of the fastest Norton's you could buy in 1931 when the M30 International still had to be launched. Unfortunately, someone blew up the engine and it had to be replaced. At least it was used as the maker intended!
Newer Post Older Post Home