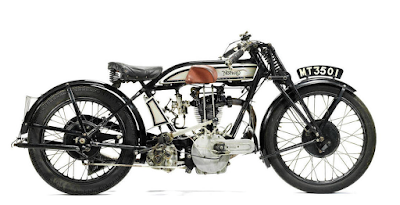 -SG- Coming up for auction at Bonhams' Spring Stafford Sale; a Model 18 Norton. I had a fair bit of contact with Nigel Seymour Smith and Tom Davis about this machine and was offered a ride on it at the Brooklands Reunion but this didn't happen as the nipple came off the throttle cable!

Ignoring the Bonhams bullshit, it certainly is an interesting bike and has steel flywheels which Tom told me showed signs of careful balancing - a Driscoll speciality. The frame - despite Pat's comments in his letter - is not really 1926 TT type as it has the lugs on the rear frame tubes to take the rear mounted footrests. It is one of three shipped to Nigel Spring at Brooklands in 1927 BUT in  my view it would not have been used much, if atall, at the track as it has normal Model 18 dimensions and would not conveniently take the long rod Brooklands Norton engines which Spring used in '27 and '28. When Spring moved to AJS in '29 Driscoll appears to have retained quite a lot of the works Norton stuff though he told me when I met him that some of the bikes were sent back to the works.
Newer Post Older Post Home